What qualifies a digital camera classic?  Certainly the age, popularity and the reputation of a camera are all important factors. These all contribute to the level a camera embedded into our collective photography consciousness.  I cannot tell if the original Fuji X100 (revealed in 2010) can already be considered as a classic camera by the general public, but it is definitely on my list.

This little gem has grabbed my attention right at the time it was announced. Such a striking retro design spiced up with a big sensor and a rangefinder like a viewfinder which actually made sense in an autofocus camera. I fell in love with it immediately and spent quite some time on the elegant Fujifilm website dedicated to this camera. The hybrid viewfinder was something quite special. To be honest, I was a bit concerned about the longevity of the little screen which jumps in an out of sight. But it was very innovative at the time and unique to this day. The lens looked interesting too. A compact 35mm equivalent lens designed for the sensor specifically. The whole package was really appealing to me. But, I am a late adapter. I like to wait until a product matures. Indeed the X100 had several issues which were mainly addressed by firmware updates. Needless to say that newer incarnation of the X100 has reportedly improved on the early weak spots of the camera such as focus speed or easy to bump dials. At the end of the day, I have picked up a Leica M2 instead. After all, many of the so appealing design clues on the X100 likely originate from the Leica M.

As the years passed by, I have almost lost sight of the small camera. Of course, I was reading the news about the releases of the revised versions of it. But was no longer particularly intrigued by it.

Until recently when a colleague of mine spotted my Leica on my desk. He casually mentioned that his camera looks almost the same the one front of me. Classic cameras are great conversation starters. So, we have started to talk and soon I learned many cool things about Dominic. I knew that he grew up in the US but I had no idea that it was the neighborhood where Ansel Adams lived at the time. I knew that he is a photographer, but I did not know that he is shooting with an X100. The best part is that he is not only owning the first generation X100, but he was also kind enough to borrow me so I could take pictures with and of it for the blog. 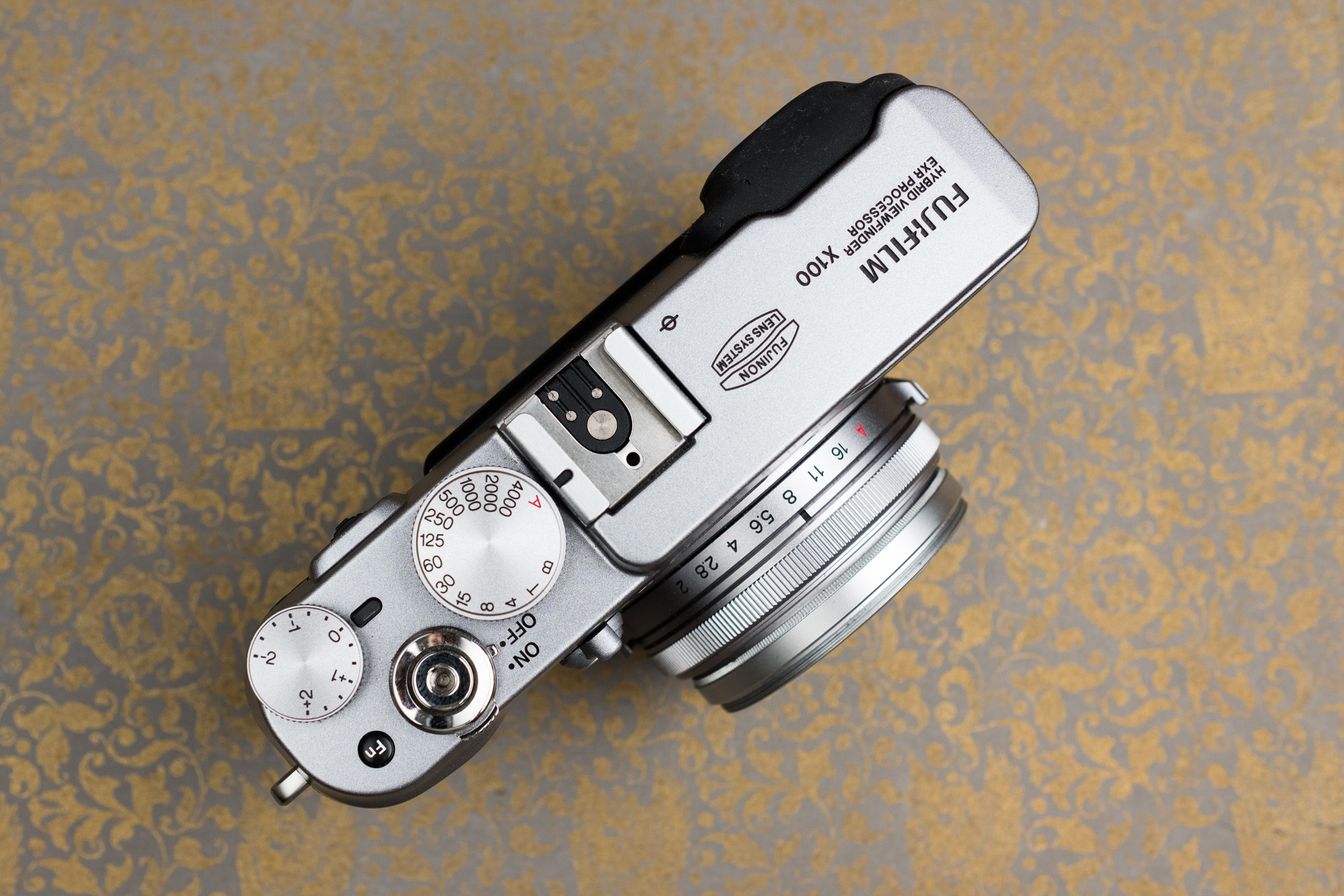 The camera is gorgeous. It felt in the hand just like I have imagined. It is small, compact and well built. Obviously, it is not the same feel as my M2, but I have never expected it to be. Brass has been replaced with magnesium alloy which makes the little Fuji lighter. But the less weight suits the X100. It is a camera which could come with me anywhere without noticing it much. I think this is probably the point of it. A camera which looks great even special takes brilliant images and small and lite enough to carry everywhere.

I have used other digital Fuji cameras before ranging from a 10-year-old point and shoot to the XT-2. It is interesting to see how Fuji carries over design characteristics over camera generations. For example, the delete photo animation is very similar to all the cameras I have used although more and more elegant and refined with each iteration. The X100 felt like a Fuji camera immediately even so it took some time to learn it’s special quirks. The menu system is slow and (unsurprisingly) looks dated compared to newer models. But once I set up everything to my taste, I could forget about the menus. I have programmed the Fn button for ISO and the Raw button to control the built-in ND filter. The button placement needed some practice time too. The AF point selection button felt out of place at first and I have still not completely figured out all the functions of the rotating ring around the D-pad. My biggest and possibly my only real complaint is that the exposure compensation dial is way too easy to move accidentally. I had many occasions of wrong settings after getting the camera out of my bag.

My favorite part, on the other hand, is the hybrid viewfinder. I love to use it in optical mode. The projected information overlay is ingenious. We may take customizable information overlay granted today but we usually find it in full electronic finders. The instant preview in the viewfinder is also something I enjoy. The little display screen slips into place right after the photo has been taken to show the captured image without the need to ever remove the eye from the viewfinder. Since the image in the electronic preview mode different from the view seen through the optics, I am always full of curiosity before I press the shutter. I excited to know how the camera would interpret the exact same view I am seeing. To be said, this experience is not for everyone. My wife does not like the fact that the lens is visible in the viewfinder. She always has been more fascinated by the image on the ground glass of a medium format SLR. A rangefinder-style optical finder does not show the depth of field. Everything is up to the imagination of the photographer, except this case the camera shows the result an instant after the actuation of the shutter.

Over the years there were several changes to the X100 cameras. The sensor and the processor have been updated many times. Autofocus and operation speed have been greatly improved throughout generations. Even the viewfinder have seen some changes. As far as I know, the only remaining constant is the lens. If it ain’t broke don’t fix it. This lens is definitely noteworthy and I think it is a big part of the X100 experience. I enjoy using the aperture ring very much. Has a good feel to it and also good to look at. The leaf shutter built into the lens is very quiet and lets me sync flash with any shutter speed. Of course, the drawback of the leaf shutter is that the maximum shutter speed depends on the aperture. The more the lens is open, the lower the maximum shutter speed gets. Luckily there is a built-in ND filter in this tiny lens. This way it is possible to shoot wide open on a sunny day with mechanical shutter without any extra accessory. Because the lens is the same on any version of the X100 family the adapter lenses are compatible with all of them. Did I mention how small this lens is? It is very comparable with my Voigtlander Color Skopar 35mm f/2.5 pancake lens in size. I have always been a fan of pancakes despite the optical tradeoffs they need make for the sake of small size. In fact, the Fujinon 23mm f/2 is also not flawless. It could get a little soft wide open and it shows slight distortion as well as a moderate amount of vignetting. The latter two can be easily corrected in post-processing or in camera on later models.

Bokeh is, of course, a very subjective quality. Personally, I find the bokeh of the lens mounted on the X100 alright. Not amazing by any stretch of the imagination, but pretty decent considering that it is a wide pancake lens with only a moderately fast f/2 maximum aperture. I have tried to compare it against my own 23mm f/1.4 Fujinon lens. You can find a comparison below. In the first example, the XF 23mm f/1.4 produces the smoother result in my eyes on f/2 but the difference is not very big.

If the background is further away it is even harder to tell the difference. Could you tell from this second example which photo was taken with which lens?

The XF 23mm f/1.4 is a sharper lens and it can open up more. At f/1.4 there is no competition anymore with the lens on the X100, but it is worth to notice the size and the price difference.

I have used the camera in as many situations as I could to gain experience with it and collect sample shoots. The following photos were taken during family weekends, walks in lunch breaks and I have even experimented with table-top camera photos with flash and softbox. Post-processing of the pictures varies from slight adjustments to heavy color grading to show what kind of results can be achieved with different approaches. I know that my little portfolio is far from a comprehensive demonstration, but I hope that it gives an idea and some of you will find it interesting.

I just cannot have enough comparison shots of these cameras. They are so similar yet very different. 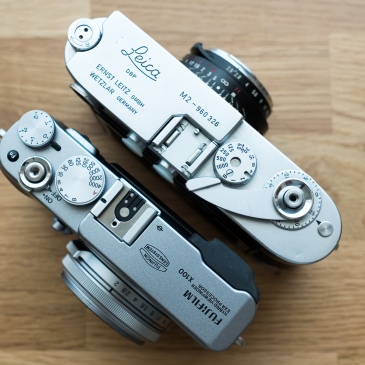 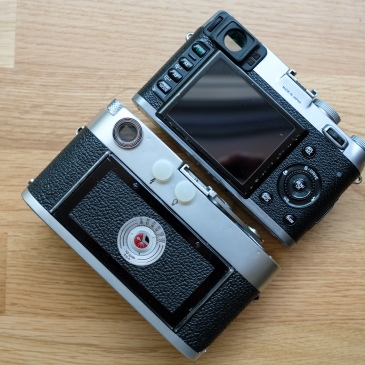 I have even recreated one of my early Leica shoots with the X100. Originally I use the Leica M2 and it was about 4 years ago. This is a terrible comparison as the installation has changed. No plastic wrap on the metal frame anymore, but we have got an extra cactus. To make matters worse, I have probably taken the first photo with a 50mm lens. Just like the cameras, the photos are similar in some ways, but they are also very much different.

Do I like the Fujifilm X100 classic? Yes, I like it very much. It is light and small, good looking and at the same time very capable. But most importantly it provides a unique user experience. I love the viewfinder, the leaf shutter, the ND filter, the dials, the design and last but not least the photos I get out of it. A camera is more than the sum of its component and in this case, I can confirm that there is a character to it. Why haven’t I bought one if I like it so much? I have got some unique cameras already. My heart is still at the film side of the photographic spectrum when I want to enjoy myself taking pictures. That is why I have a Leica M2. For my choice for a digital camera had to be more practical with interchangeable lenses. But it is a Fujifilm camera and it was the original X100 which planted the idea to consider this route at the first place. Would I recommend it? I would definitely recommend the lineup. Perhaps a later model is a better choice with more mature AF system and a newer sensor. But I find the X100 classic perfectly usable today. Just make sure that the firmware is up to date.

Thank you Dominic to borrow me your camera and make this post possible.

If you have wondered, the map on the first picture is strange because it is a World Atlas from 1930. I have found this map in the paper garbage and found it fabulous for backgrounds. The inner side of the cover has the golden pattern which you can see on most of the pictures about the camera.