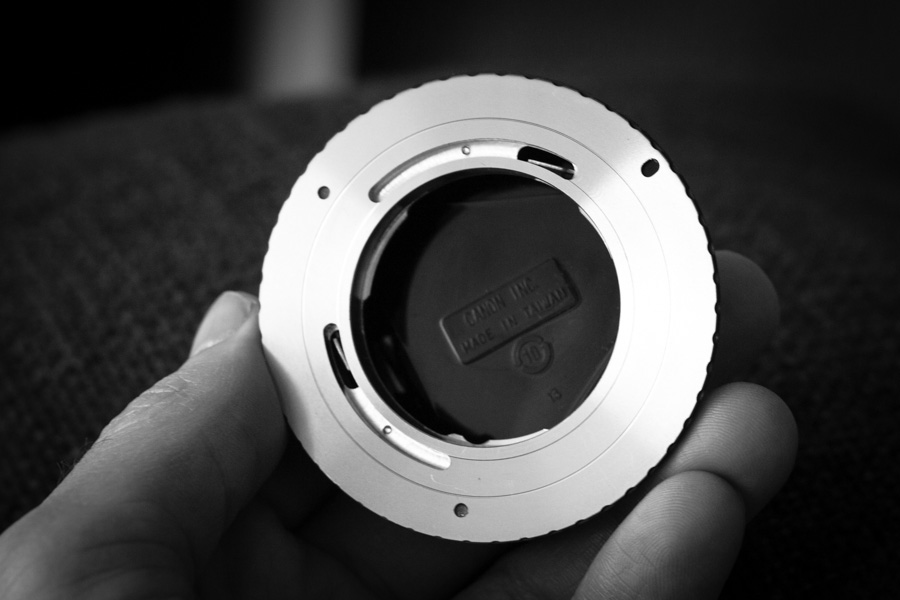 This post is a response to a comment asking me about my Exakta to Canon EOS adapter which I am using for my Trioplan 100mm lens. The reason I wanted to have this adapter is that I had got an Exakta Varex IIa with 2 wonderful lenses (Meyer-Optik Görlitz Trioplan 100mm f/2.8, and a Carl Zeiss Jena 50mm f/2.8) which I really wanted to try on a digital camera.

I have no information about the manufacturer of this adapter since there is no trademark on it and the packaging was also very minimalistic (small white paper box with a price-tag). I bought it new in Hungary for a little more than 20€ which is a little pricey in my opinion if you compare it to regular M42 to  EOS adapters. But it has to be said, that this adapter is very well made, and has a more complex shape than an M42 model, thus manufacturing must be more expensive.

The adapter is very thin and I had no problem to focus to infinity when using it. It does not feature any electronic elements, but my Canon 450D is capable to work in aperture priority mode when I preset aperture on the lens. This works really fine for me with live view for focusing.

The Exakta mount features 2 bayonets: an inner bayonet for smaller lenses and another one which is outside of camera body for large lenses. This adapter can be used for the inner mount only, but it is not an issue at all for me as I usually don’t use large telephoto lenses.

Note the 2 red dots, they indicate the matching points for the lens is attached, although only one is valid for each lens. I suppose this is necessary to make possible to lock different type of lenses in the right position (aperture indicator it should be at the top). The adapter clicks when the lens is in position, so it is very straightforward to use. The only trouble could happen if you picked the wrong red dot so the markings on your lens could be on an odd position.

The copper plates act as strings and they are used to lock the lens in position and also they can be used to release it. You have to remove the lens with the adapter from the body in order to change lens. The locking strings can be accessed only from the back of the adapter.

The Meyer Trioplan 100mm f/2.8 mounts flawlessly with this adapter, but I was a bit disappointed when I realized that  I cannot mount my 50mm Tessar. The reason is the shutter release button (1) which is built together with the lens itself.  The little arm which holds the shutter release button collides with the adapter (2), therefore it is not possible to mount. I have read that it is possible to remove this part from the lens, but frankly, I don’t want to do it.
In addition, this button triggers the aperture mechanisms and sets the aperture in place when pressed. It means that it would be very tricky to shoot with this lens on a digital body even if the adapter would work (apart from wide open settings).

Even though I am sure these lenses could be converted for digital use, I prefer to look for lenses without this shutter button construction.

7 thoughts on “Exakta to EOS adapter”